I am sure it is known that many musicians - whether they be fine, classical, poppy or jazzy - call New Jersey their home.

However, there are some bands that just plain kick the teeth out of music and take no prisoners! And one of those bands is the North Jersey based punk band - Six to Eight Mathematics!

Six to Eight, as they are known to friends and fans, has been around since 2004. The band has two CDs available on CD Baby - High Heels, Whiskey & Mayhem and Mental Melodies (click on the links to pick 'em up!).

I was able to sit down with them back in May to promote an upcoming show on June 24th, at the Clash Bar in Clifton, New Jersey. Six to Eight will headline the DIY Radio Presents Concert. They concert will feature many amazing bands and begins right at 8:30 pm.

I had been following them since 2011 and I saw them live in 2015 (see pictures below)! It is amazing to see real music on a real stage on a local level that is not some cheap cover band! Their name comes up from time to time in punk circles here in New Jersey and - wow! - everyone agrees - this is the band that takes the stage, puts on a show and leaves 'em wantin' more!

And when I sat down to talk with the quartet, they discussed it had been a year of challenges! However, it was challenges they overcame and June 24th will be their first back!

QUESTION: Can you explain exactly what the situation was, that was preventing you from singing?

ALANA QUARTUCCIO: Yeah, I got hit with some health issues. I had to have a benign brain tumor removed and I became deaf in my left ear as a result. I developed a vocal polyp from that operation - which meant more surgery.

So I had to work to get my voice back, and recover overall.

QUESTION: Was there ever a fear the band would have to go their separate ways?

ALI MCDOWELL: We were willing to talk about taking a break, but we never once mentioned quitting! We wanted to support Alana.

DAN PEACOCK: We were very supportive of Alana. We're like a jock strap! [LAUGHS]

MARY BETH KOCHMAR: Actually, the band became a motivation for Alana to get better.

ALANA QUARTUCCIO: Granted, I have had to relearn things and, right now, I am still going through vocal therapy, but there is a definite improvement from having no voice to where I am now.

QUESTION: I can tell you guys really have a drive for this music!

ALI MCDOWELL: In our day jobs, we are all professionals and work very hard.
And that is an attitude we bring to our music.

ALANA QUARTUCCIO: Yeah, I would say we all have a perfectionistic drive to everything we do.

DAN PEACOCK: Also, I find playing music is an amazing outlet. Sometimes, I
will admit, I've had a long day and I have no interest in practicing, but an hour into
it, I am so glad I did.

MARY BETH KOCHMAR: Yeah! One of the reasons we do this is to record our
own music and we have total control.

QUESTION: Being a punk band, is there ever a fear that punk music is just not marketable?

MARY BETH KOCHMAR: Punk has always been underground and people find our
music. We are on iTunes, CD Baby, Spotify and YouTube so we are easy to find.

DAN PEACOCK: Yeah, punk music has never been on the radio and that's fine.

ALANA QUARTUCCIO: Oh screw that! We play what we want to play.

ALI MCDOWELL: And fans do seek it out and they find us! It's one of the reasons we do live shows like we do at the Clash Bar.

ALI MCDOWELL: Going there is like a house party. And I love the place! It's where my husband proposed to me!

ALANA QUARTUCCIO: The Clash Bar is great and it's home for us.

MARY BETH KOCHMAR: They treat the bands very fair there.

DAN PEACOCK: The owners have the best collection of movies ever! The TV screens are constantly playing the best B-movies and it's just so much fun.

QUESTION: Well this sounds like this will be a lot of fun!

ALANA QUARTUCCIO: It really is!

We have the best fans and the best friends so we are excited.

QUESTION: Thank you guys so much! 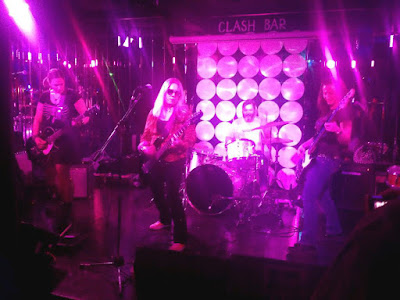 All rights reserved. No part of this publication may be reproduced, stored, or transmitted in any form, or by any means electronic, mechanical or photocopying, recording or otherwise, without the prior permission of the copyright owner.